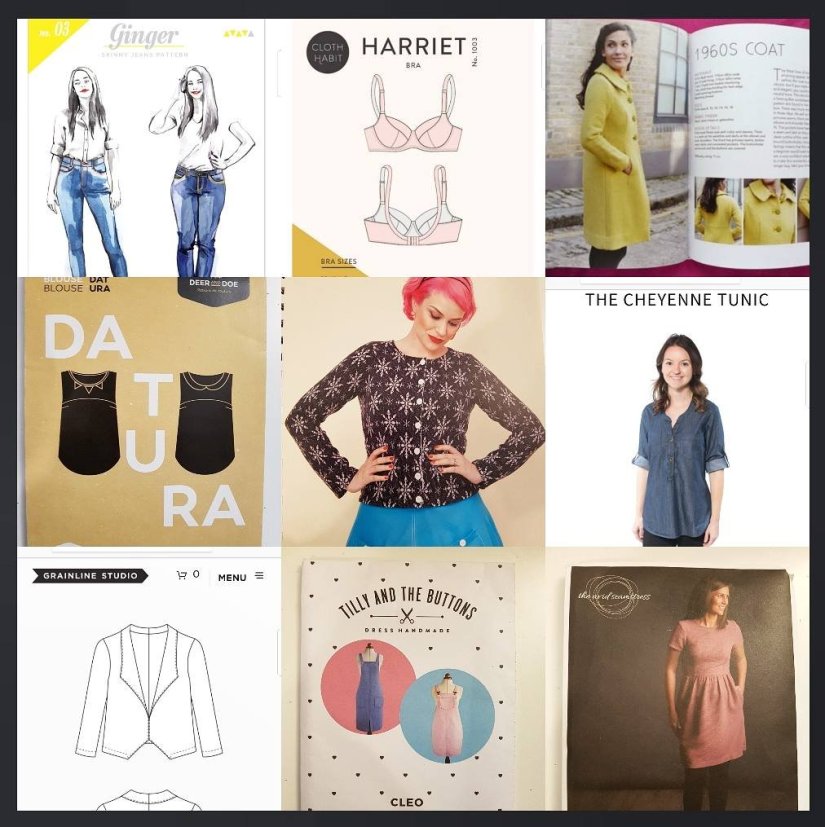 At the end of 2017 I planned out some proposed makes for 2018. Having participated in the Make Nine challenge before I know that for me, it’s more of a guide, rather than an absolute “to make” list although this year I did actually try all of them. I got on better with some rather than others but they’ve all taught me something so it’s overall been a good experience.

Here’s a wee run down of the planned patterns and how I got on!

When I first started sewing, making jeans felt impossible but also like an amazing goal to aim for. I’ve written a whole other blog post about my Ginger Jeans making experience so won’t go into too much detail here save to say they were a game changer because they gave me so much confidence in my ability to fit a pattern to my own shape.

I made my jeans in January 2018 and wore them solidly through til November when the zip teeth came off the tape! I know they will be repairable and probably will stop to fix them at some point because I have such a sentimental attachment to them. But 11 months out of my first pair isn’t bad! 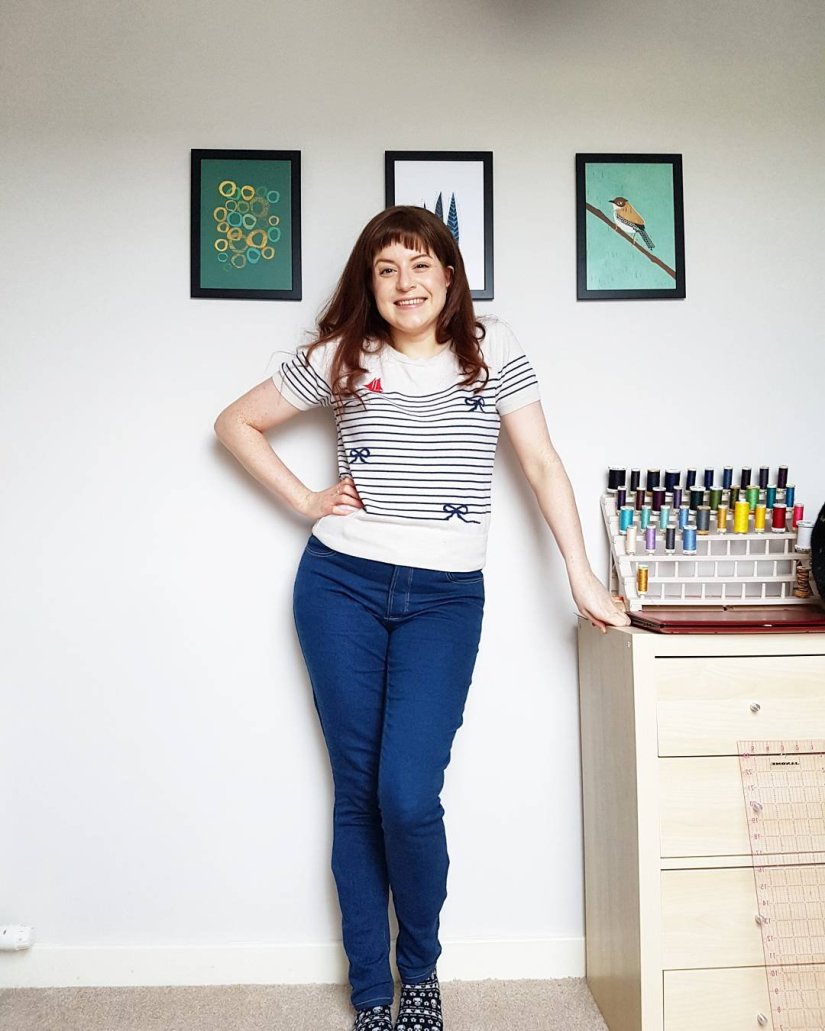 I did have another go at jeans making this year but feel that I’ve overfitted them so they’re a bit too tight. I think that’s mostly down to using a stretchier fabric and having to adapt to that.

If I could, I’d bottle the joy I felt as I made my first pair of jeans and the elation of completing them.

This was my second tricky project of the year, which I’ll class as semi successful.

I had a go at both the Watson and the Harriet bras by Cloth Habit. 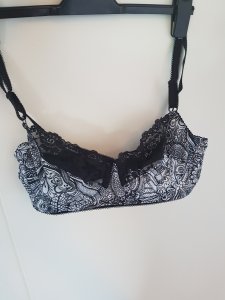 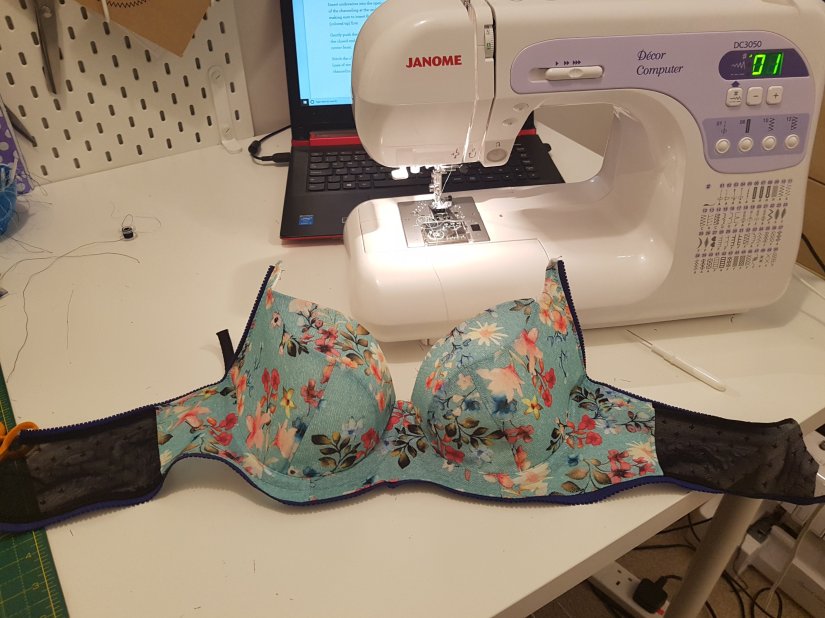 One of the other challenges I’ve found with bra making is the lack of supplies in the UK. I’m so jealous of the ranges available in the US and Australia! I found that I was having to search for individual pieces without really knowing what I was looking for and mostly used Etsy. I’ll probably have a go with a bralette pattern before going back to something more structured.

I found the sizing of this pattern a bit odd, and so cut out and made up the lining first to check the fit before cutting into the wool for the coat. I’d deliberately bought a cheaper material because I’d never tried making a coat before. 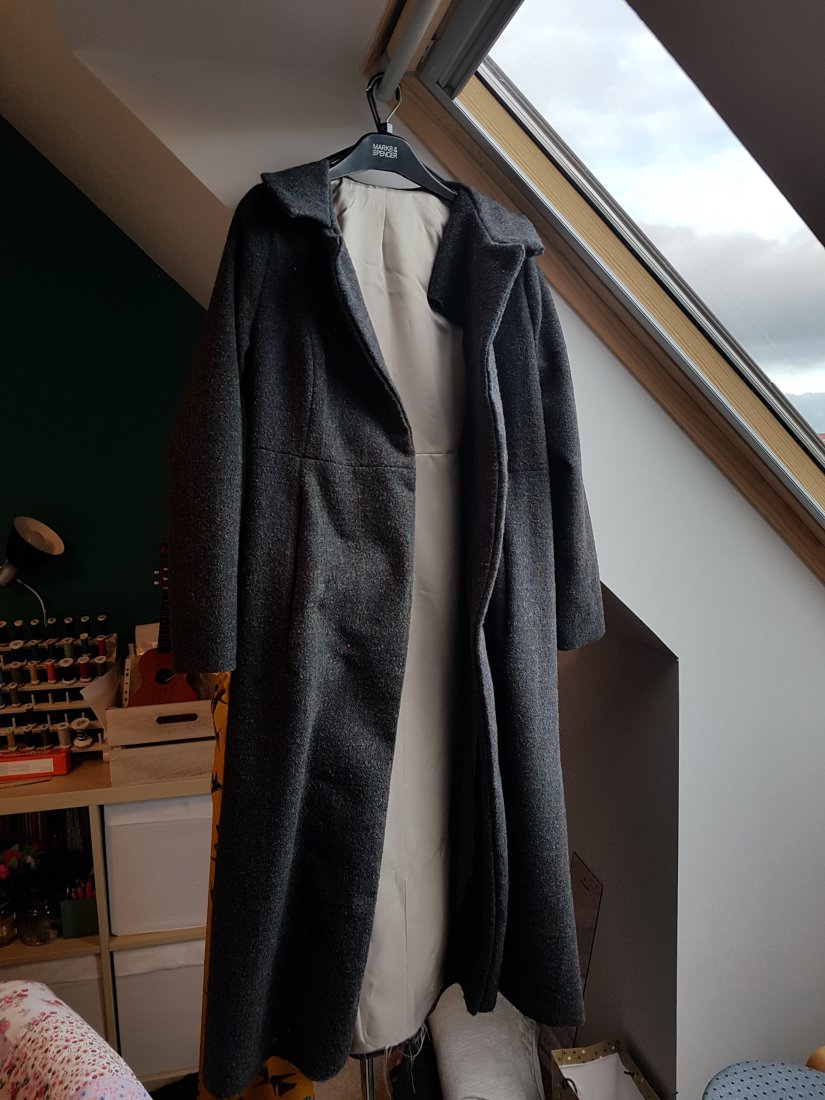 Looking at the pattern pieces I figured if you can make a shirt dress you can make a coat, the construction is much the same. By the time I got to hand stitching the lining into the coat though I was losing love for the project and realised that once I added buttons the fit wasn’t going to look good. If it was fastened it was going to look a bit squashed and small and the pocket linings would be exposed.

I also realised that, having chosen a cheaper material, it wasn’t going to offer any real warmth and that’s just impractical living in Shetland! I’ve been living in my shop bought feather down jacket since September. (one of the best purchases I’ve ever made!)

I feel a bit sad about this one. Apparently the pattern is based on a vintage one which might explain why the sizing was a bit unusual.

However it has not put me off coat making. I might hack this one into a jacket. Taking into consideration the climate in Shetland I might be better to focus of something that I could wear when it’s a bit less cold. Possibly the Kelly anorak by Closet Case. I’ve seen some beautiful versions of this crop up on Instagram and with the level of detail they put into their patterns I’d feel more confident in making this. 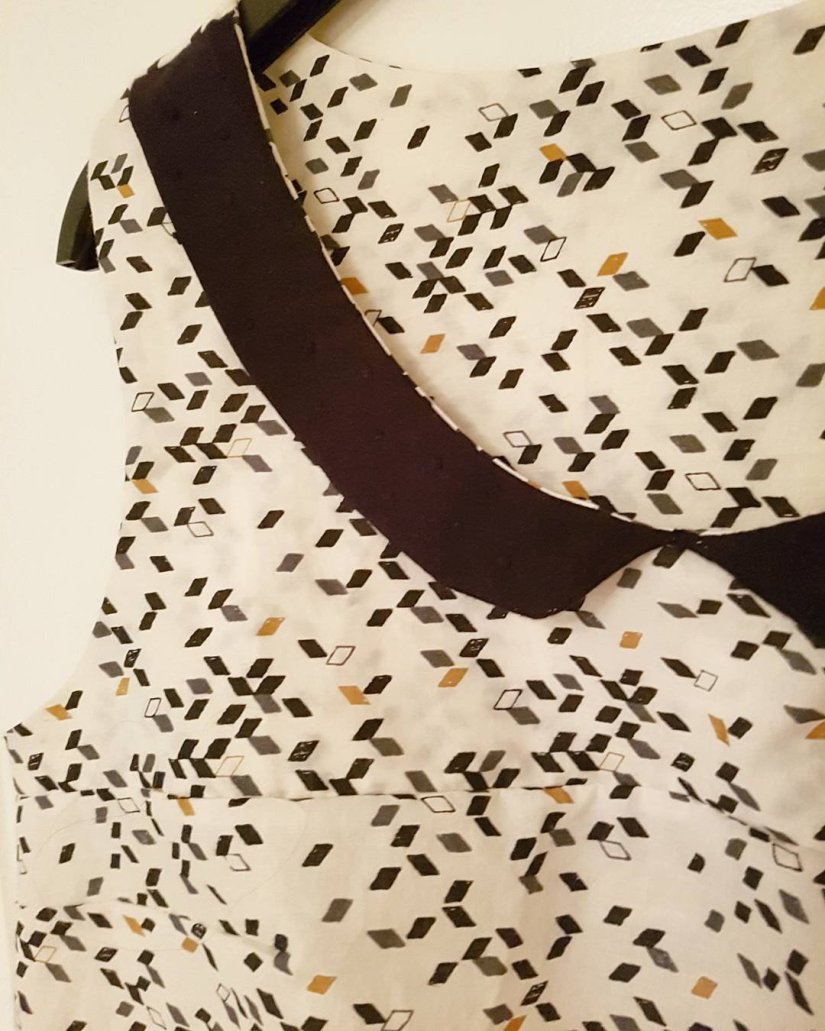 Beautiful little blouse, and the first time I’d tried a Deer and Doe pattern. There’s no template for the bias binding which threw me a little and I ended up cheating a wee bit and doing a foldover hem instead.

I’ve made both versions of this top, because of its shape and seamlines it would be great for using up bits of leftover fabrics or a way of showcasing a fancy fabric contrasted with something plainer.

This one didn’t really work for me which I was sad about because I felt I’d wasted the fabric. In the picture below I really had to stretch it to get it pinned closed. I’m not sure if I got the fabric choice wrong or should have used a different pattern size. I’ll maybe repurpose the fabric into something for a baby gift at some point. 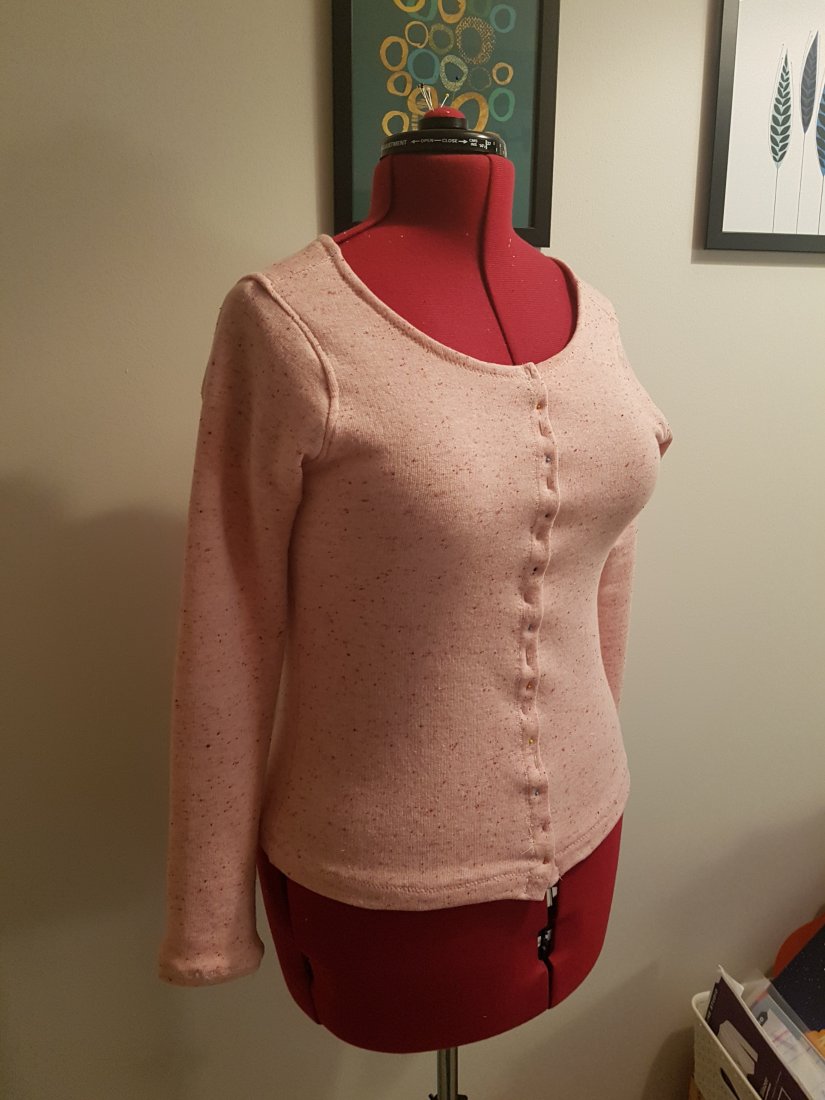 I’ve started making the Driftless Cardigan by Grainline Studio and think this is going to be a more comfortable fit and style for me.

I used to have a RTW top which looked just like this. I loved it and wore it loads until it got damaged by the iron one day so was excited to try this pattern.

I used fabric from Pound Fabrics which was a nice way of testing it out without spending loads because the pattern does require a good bit of fabric to play with. Unfortunately I found that the finished product looked a bit shapeless and frumpy on me, it was maybe the fabric I used, or perhaps the sizing wasn’t right for me. Either way might need some tweaking before I make it again.

It did however teach me “the burrito method” so all is not lost! 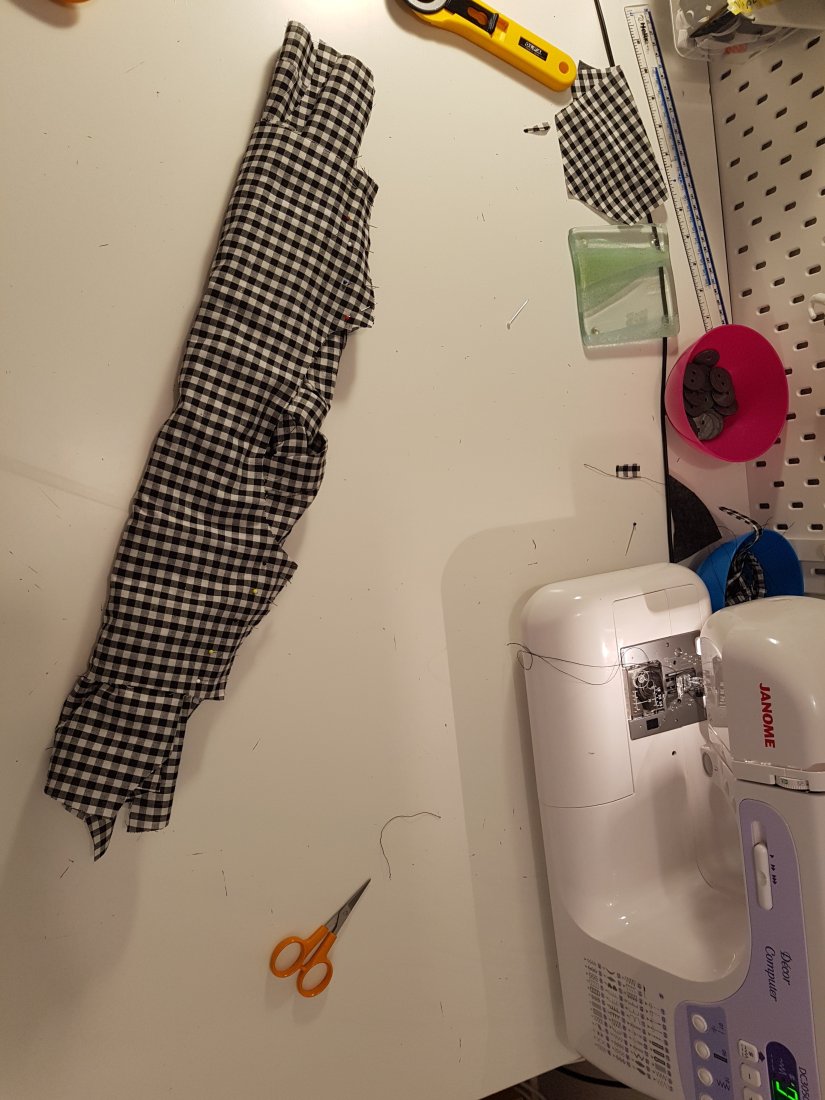 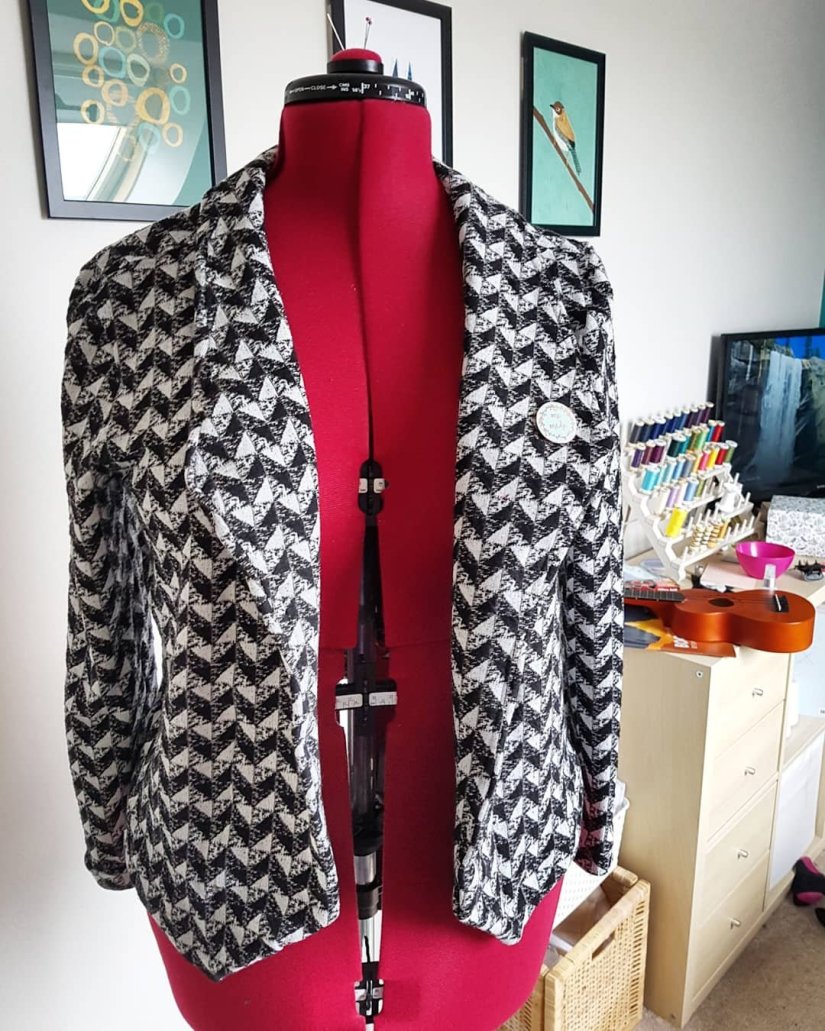 Another Grainline Studio success! This was a delight to make. I hadn’t realised until I came to purchase the pattern that it actually uses jersey. So a wee bonus is that you’ve got a really comfy garment to wear that looks really smart!

The fabric came fromFabric Godmother (in the sale too I think!) and if you look closely you’ll also spy my Pink Coat Club “Me Made” pin.

So much love for TATB patterns. My Cleo dresses have been some of my most worn items this year.

I made two denim cleos, they go with everything and are super comfy. 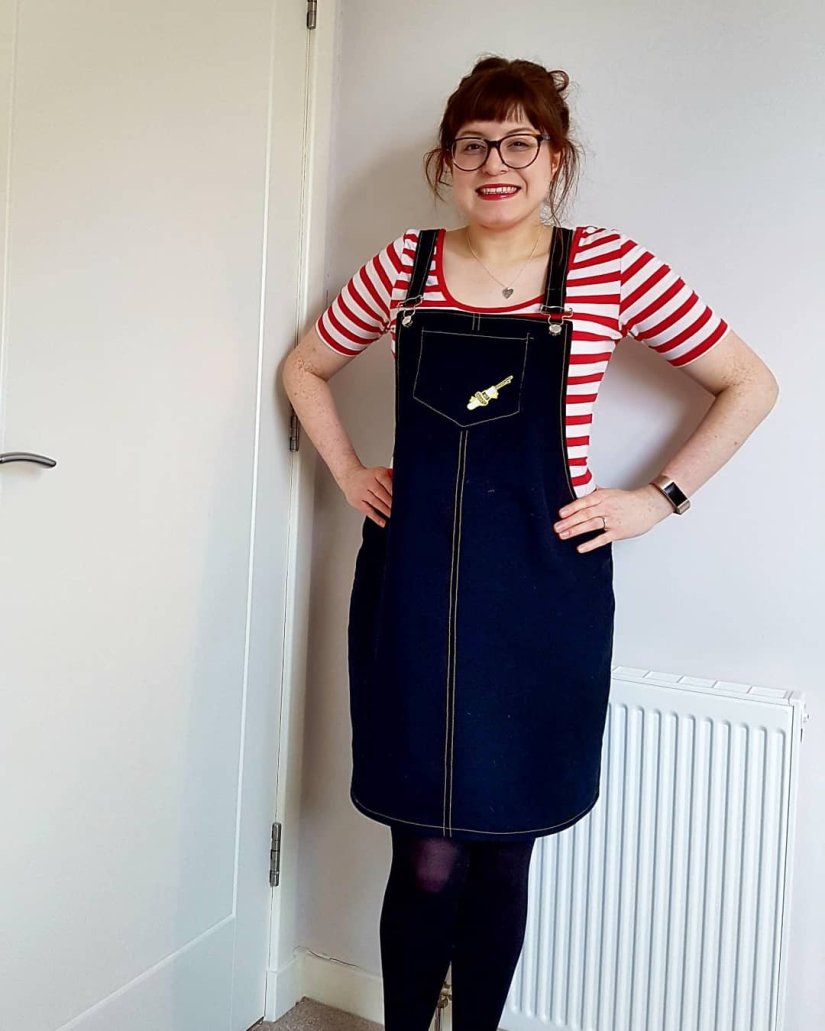 I’ve actually made this dress three times but only the most recent one has been truly successful! (does that make it a Goldilocks dress?)

The first one was pre-overlocker and it frayed so much in the wash that I couldn’t wear it (sob!), the second time I made this dress I used a cotton which I think was maybe just a little bit too stiff. I also felt like the neckline was a bit higher than I’d like. When I made it the third time I used a bigger seam allowance on the neckline so that it sat just below my collar bone rather than on it and this time used a Liberty lawn fabric. It’s quite lightweight so I just wear it with a slip dress underneath (which is also a great tip if your fabric goes static!). I could do with going back and taking the side seams in a little too as I was between sizes and cut the larger one.

I’d like to make it again but play with the neckline a bit, maybe adding a collar or turning it into a scoop or sweetheart neckline. 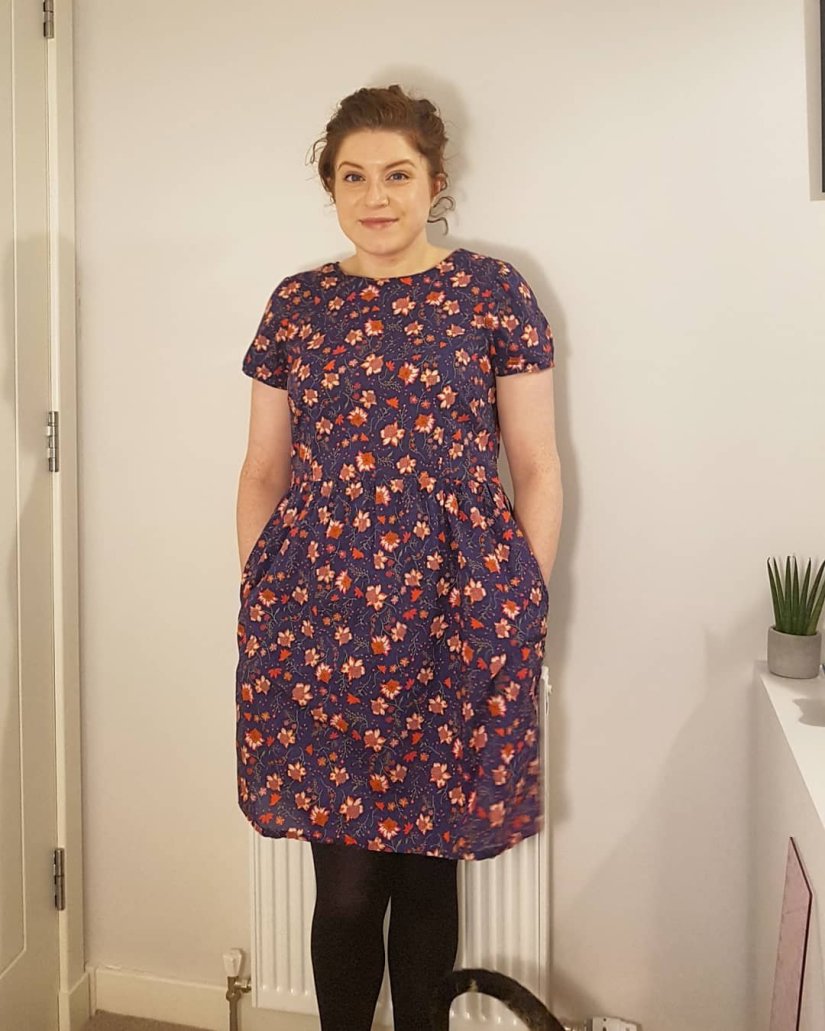 Even though I don’t always complete the planned makes, I still like the idea of Make Nine as a way of focusing your ideas for the year so will be planning out some potential makes for 2019 soon. 🙂